Owned and operated by Dr. Anne Starr and Brian Rehwald, Valhalla Andalusians’ home is a 45-acre farm situated at the southern end of the beautiful Slocan Valley near Nelson, British Columbia, Canada. In this stunning environment we breed, train, show and sell Pura Raza Española (PRE) Andalusian and Andalusian cross horses. We also offer stud services to outside mares.

Nestled in a broad curve of the Slocan River in the fertile valley bottom and surrounded by the lush wilderness of the rugged Valhalla and Airy Ranges of the Selkirk Mountains, we are truly in a heavenly place.

Life is very good here on the farm and all of our animals lead an enviable existence. They are fed the organic hay we grow on our farm, drink the fresh water that cascades down the mountain slopes above and run free in our green pastures from spring until fall. 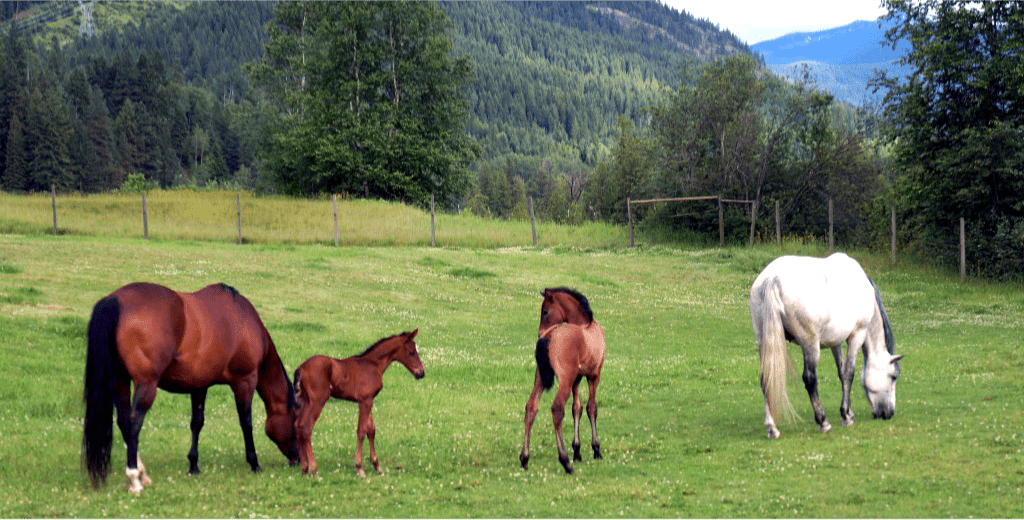 Here at Valhalla Andalusians we pride ourselves in being the best breeders that we can possibly be.  We started out small and had the philosophy to always “buy big” and “breed up” to the point that all of our current breeding stock have either produced US and/or Canadian National Champions or are themselves US and/or Canadian National Champions.   The quality of conformation, movement and talent that we have in our barn now is incredible .  We’ve always believed that to produce top quality offspring you have to have both talented and beautiful mares and stallions.  Their temperaments are crucial for producing that riding partner that always gives 110%.

We currently have two breeding stallions standing at stud.

Norteño will be standing to a limited number of outside mares in 2019 so book early.

We also have nine Andalusian brood mares of which seven of them are either US or Canadian Multi-national champions or both. The two mares that haven’t been shown to a National title are OA Sienna (she has never been shown but has produced five national champion foals) and VMF Gema Preciosa (she broke her hip as a yearling preventing her from being shown but is a very happy brood mare).  We also had VA La Duquesa enter the brood mare ranks 2016 and in 2017 and she and Amado gave us a beautiful grey filly, VA Espiritu Preferencia.  In 2018 Duquesa gave us a stunning grey colt by Norteño (VA Viajero) with movement to die for.  Duquesa was the 2017 and 2016 Canadian Supreme Halter Champion and the 2017 and 2016 National Champion Jr. Mare and Gold Medal Movement winner. A great addition to the band of girls.

For more information on any of these horses and their pedigrees please refer to the individual pages for each horse where you will find full biographies, photos and video links.