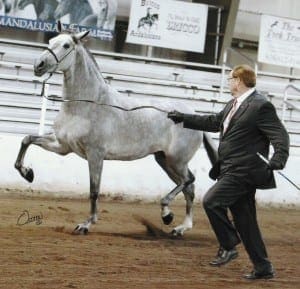 A 2006 Grey PRE Mare standing 16 HH, Estampa MA is one of our absolute finest mares. Bred for outstanding movement and conformation, Estampa was pronounced U.S. Reserve National Champion Filly in 2008 and Canadian National Champion Senior Mare in 2012. Her sire is multi-national champion senior stallion, Ocioso, owned by Marios Andalusians. Estampa has been shown under saddle as a 3 year old and as 6 year old capturing numerous Canadian National Champion titles including Dressage Suitability and Show Hack.  Estampa has given us 4 foals to date.  She is the dam of VA Manolete’s Hijo Amado – our 2010 Multi-National Champion stallion, VA Katerina – our 2013 Reserve National Champion filly (sold in 2014), our 2017 colt by Sandokan – VA Doble de Manolete (“Doble” is a stunning grey colt with amazing movement and he is on our sales list) and VA Cadencia – an absolutely stunning filly by our stallion Norteño Rey MA.  Cadencia has exquisite movement – she is also on our sales list. 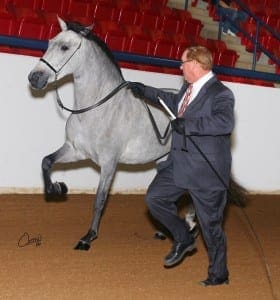 Inez is a 2005 grey US National Champion Andalusian mare. She was purchased by Valhalla Andalusians in the spring of 2008 from Schuyler Van Woerden. She was immediately put into training with Warren Mather of Choice Show Horses. She was shown at the 2008 US Nationals where she won Reserve National Champion Andalusian Mare, All Ages, Amateur to Handle. She also placed Top Five (placed 3rd) in the National Champion Andalusian Jr Mare class and to her credit, she won the gold medal for movement against some very tough competition. Since returning home from Texas, Inez has become one of our top broodmares giving us 3 National Champion fillies and one gorgeous colt (Tigres) that was sold before he was shown. Inez has also been started under saddle this year and is proving to be a very talented mount with beautiful extensions that she gives very willingly and with great elevation.  Inez gave us a full brother clone to VA Tigres del Norte for 2015 – VA Toledo (sold).  In 2017 Inez had a stunning filly on a repeat breeding to Escamillo.  Born on St. Patrick’s Day, VA Esmeralda has great elevation and suspension.  She is currently on our sales list.  In 2018 Inez gave us a fabulous filly by our stallion Norteno Rey MA – VA Elevado.  With his knees above horizontal, Elevado has the best movement I have ever seen  – comparable only to his grandfather – Escamillo. 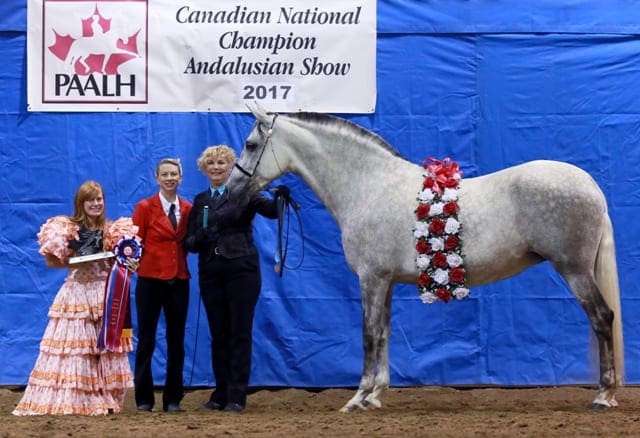 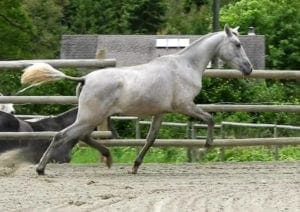 VA La Rosa – is a beautiful grey PRE Andalusian filly out of our foundation mare OA Sienna and by our US and Canadian National Champion stallion, Norteño Rey MA. This filly is related to so many National Champions from both Sienna and Norteño – for morphology, performance and movement.  She is so sweet tempered and will be at least 16 HH when fully grown, possibly more.  Her movement is expressive, elegant and strong. Huge dressage prospect!

Rosa is inscribed with ANCCE with Carta in hand.  Rosa is so spectacular she is going to join our band of brood mares.