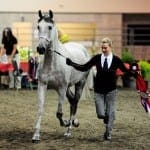 Valencia is a 2005 PRE grey Andalusian mare. To date, she is the only filly OA Sienna has ever had. Her sire is Quimerico KF formerly owned by Paul Dufresne of Training for Courage. Valencia completely outdid herself in 2013, which coincidentally was the first time she had ever stepped into a show arena. Not only was she pronounced the Canadian National Champion Senior Mare but she can also boast winning the Canadian National Champion Best Movement class as well. Her daughter, VA Azucena was Reserve Champion in the Best Movement class reinforcing the fact that this is a great line of movers and shakers. Her 3 month old colt that was at her side, VA Alejo, was pronounced the Canadian National Supreme Halter Champion for the whole show. Great job Valencia! In 2013 we bred Valencia back to Alejo’s sire (our black stallion Amado) and got a gorgeous grey colt with huge movement, VA Titanio. Virtually a clone except for the colour. Valencia has done outdone herself again in 2015 and has given us on of the best colts we have bred to date. VA San Paulo was born on April 1st, 2015, is huge with conformation and movement beyond belief. He is PRE, Bay and will be BIG. He will be sold to a dressage home only. 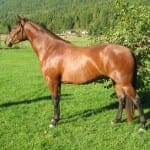 VMF Tivios Sr Jackson is a beautiful  bay 2005 Azteca Gelding.  His sire is Arrow Verono and his dam is our AQHA mare Dial A Tivio.  This handsome boy was sold as a four year old in 2009 to Katia Heines where he was started under saddle and entered into her dressage program 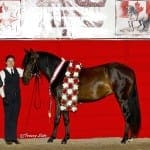 Gaviota is a 2005 3/4 Andalusian filly.  In 2007 Gaviota was shown as a 2 year old at the inaugural Canadian National show and became the first National Champion ½ Andalusian Jr Mare, 4 and under and the first National Champion Half Andalusian Best Movement winner.  This filly was not only gorgeous but incredibly sweet as well.  Her sire was bay PRE stallion Arrow Verono and her dam was our Half Andalusian mare VMF J-Lo. Gaviota now lives on Salt Spring Island with her proud and loving owner, Mariette Klemm