Norteño Rey MA – US and Canadian Multi-National Champion in Halter, Movement and Performance.

Amado outdid himself in 2019 after not only winning Champion Western Pleasure Open but also the Supreme Champion Western Pleasure Open at the Andalusian World Cup in Las Vegas. Whoop Whoop !! Two back to back wins with stiff competition, nicely done Amado.  Amado was also the 2019 (2017 and 2015) Canadian National Champion Sr Stallion and Gold Medal Movement winner.  He was Reserve Champion in both 2017 and 2015 in the Champion PRE Stallions, All Ages class.  We were OK with that because in 2015 his 4 month old son, VA San Paulo, was the Champion and in 2017 our other stallion Norteño Rey MA was champion.  San Paulo was also the Canadian National Supreme Halter Champion which is a repeat performance from 2013 when Amado’s son, VA Alejo was the Supreme Halter Champion.

Coming from a long line of National Champions, both in North America and in Spain, Amado is a National Champion in his own right.  Amado was shown in 2010 and was pronounced US National Reserve Champion Colt, 2 years and under, when he was only six months old.

On Amado’s topside, his sire is Canadian National Champion Senior Stallion, Mystique’s Manolete.  Manolete has won over 20 National titles in both performance and halter.  His grand sire is Sandokan who was US National champion Jr. Stallion in 2003, Reserve National Champion Sr. Stallion in 2006 and winner of numerous National performance titles.  His Great Grand Sires were Molinete IV and Navarre GF, both multi-national title holders.

On Amado’s bottom side, his dam is US and Canadian National Champion Estampa MA. His Grandfather is US National Champion Ocioso VIII, producer of more national champions than any US sire to date. He also has Leviton, Hosco and Genio III in his long list of champion forefathers.

Amado had his first foal crop in 2013 with phenomenal results. His 2013 son, VA Alejo, was shown at 3 months of age at the Canadian National Andalusian show with Judge Sue Burkman of Santa Barbara, California presiding. She pronounced Alejo to be the Supreme Halter Champion of the entire show.  Her words were “This colt is gorgeous, I mean absolutely gorgeous”.  In 2015, Amado’s son VA San Paulo was pronounced the Supreme Halter Champion under Hall of Fame inductee judge Mr. Richard Petty.  Not only did he pick a 4 month old colt to be the best of show but Mr Petty actually walked over to the microphone to comment to the audience on the “outstanding quality of this colt!”. In 2016 Amado’s yearling filly, VA La Reina and his weanling filly, VA La Luna Elegante were the National and Reserve National Champion Filly, 1 year and under.

AMADO HAS BEEN SOLD AND WILL BE MOVING TO CALIFORNIA FOR SOME FUN IN THE SUN. 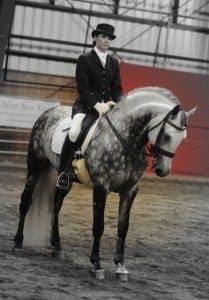 (SOLD) Mystique’s Manolete is an outstanding 2003 Grey PRE stallion. His beauty, strength, conformation, and his superbly elevated movement, are what make him the superstar that he is. Manolete was very comfortable in the show arena. Starting as early as a yearling, Manolete was awarded the grand slam in the halter world. He won Canadian National Champion Colt, 2 and under, NC Jr Stallion and NC Sr Stallion twice as well as numerous gold medals for movement. He also went on to win over a dozen National titles in performance over the 3 National shows he went to while under saddle. NC English Pleasure, NC Dressage Suitability, NC Show Hack, NC Dressage Hack just to name a few. He was also shown at open shows in dressage by both Olympic rider Ms. Leslie Reid and Mr. Sven Smienk scoring in the 70’s up to 3rd Level.

It was with great sadness that we sold Manolete to Mr Bob Price of Chicago in 2010 but it was the right thing to do as Manolete has an opportunity to reach his potential in the dressage world that he wasn’t able to do here in the Kootenays.

Manolete has produced some very special offspring for us to help carry on his legacy.

(SOLD) Agosto is a 2007 Multi-National Champion Black PRE stallion.  His sire was our foundation stallion, Mystique’s Manolete and his dam was our foundation mare OA Sienna.  This combination produced a beautiful stallion with exceptional movement.  Agosto won the 2008 Canadian National Champion Colt, 2 years and Under as a yearling.  He was then shown under saddle as a 3 year old in 2010 where he won 5 national titles in dressage and English pleasure both in open and Junior Horse.  Just prior to Agosto’s 4th birthday he performed at the Fiesta where he did a spectacular exhibition freestyle displaying extensions that would take your breath away.  Agosto was sold in 2011 to Wendy Feller where he stands at stud near Portland, Oregon.  Agosto is the sire of our beautiful black ¾ Andalusian filly, VA Sofia.  Sofia was the 2013 Supreme Halter Champion, part-bred.
Agosto Offspring